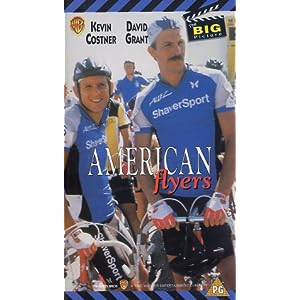 With that, Natalie pushed something into my hands. It was a VHS video cassette. With this glowing endorsement how could I not consider American Flyers for one of my movies?

In some ways American Flyers has aged less well than Top Gun however. It is *so* ‘80s. The fact that it came on VHS (after having never been released in the on DVD) really got me in the mood. There is a pumping synth-rock sound-track with wonderfully over-earnest lyrics (I challenge any viewer to not come out singing along to Glenn Shorrocks’s “Let’s go – American Flyers!”). There are personal battles to fight as well as political – Marcus has a history with ex-teammate Muzzin, and the Soviet Belov (with their red uniforms, well orchestrated team, and recourse to cheating) is accused of only being Olympic champion by default due to the boycott of the Moscow Olympics. (As a matter of fact Muzzin also has a rant about the policymakers in Washington who withdrew the United States from that competition depriving him of something he had been training for all his life. “I’m not riding for !” he states). A young Kevin Costner is in it – with a beautiful moustache. There are an inordinate amount of shots and scenes and conversations involving McDonalds. And during the opening sequence Davey is seen cresting a hill with the entire background being taken up by a superimposed American flag, flying in the wind. The film really pushes the ‘’ of its title (the race commentary continually points out that the Hell of the West cycle competition is tougher and at higher altitudes than anything in ). Oddly enough the director, John Badham (of Saturday Night Fever, WarGames and Short Circuit fame), was actually born in ; even more oddly, he is the elder brother of Mary Badham, who played Scout in To Kill a Mockingbird.
So in the same way that Top Gun is about more than just flying fighter planes, American Flyers is about more than cycling. It is about family. Marcus (Kevin Costner) and Davey (David Grant) are two very different brothers, still trying to come to terms with family tragedy. Their father had died from a cerebral aneurysm. The driven Marcus would not forgive his mother for how she dealt with her husband’s illness and walked out, moving to , to become a sports physician. The free-wheelin’ cowboy-hat-wearing Davey stayed with her in . He is less focused and has dropped out of pre-med and pre-law at university; he is currently majoring in Eastern philosophy and cowboy movies (“The ying and the yang and the bang-bang.”) But he is starting to worry that he may have inherited his father’s condition. Marcus takes him to his sports institute to check him out. Their rivalry spurs David to outlast his brother on a stamina test. But he then overhears a conversation between Marcus and Dr Conrad (John Amos) that seems to suggest that Davey has the same symptoms as his father. It seems important for them to reconnect, and the best way is their shared love of cycling. They both enter as a team into a notoriously tough cycling competition called ‘The Hell of the West’ with three separate stages dotted around the Colorado Rockies. There is a real sense of Marcus passing on his drive and sense of purpose to his carefree younger bro.

I have never seen a good sport movie. This could well be because most movies come out of , and thrives on niche sports that fail to exist anywhere beyond their borders like baseball and American football. Really, I have only ever been able to enjoy a sports film for its cheesiness (I’m looking at you, Escape to Victory!). Taken on the same grounds American Flyers is actually pretty watchable. It also helps that the rules of cycle racing are pretty clear – get to the finishing line as quick as you can. Where there are variable rules – such as the four sprint flags in the second stage – the film gets around them by having Marcus talk his brother through tactics. Action during the race itself is helpfully explained by a commentator. The commentary, the ‘80s aesthetic, the synth-heavy score, the occasional snarled comment from Muzzin (of the “Watch your line!”  or “Enough of this Sunday stroll!” calibre) make the cycle races feel surprisingly engrossing – like playing Daley Thompson’s Decathlon on a ZX Spectrum. And while I could tell from the outset that the business end of the competition would be a duel between the Muzzin, Belov and the Sommers boys, I honestly did not know who was going to be crowned champion. OK, sure, the ending is a touch sentimental, and the film closes without really covering the ‘what happens next’ of someone suffering from a cerebral aneurysm, but I would tend to class this film as a hidden gem and well worth a watch.

What have I learnt about ?
I was worried that the answer was going to be ‘nothing’. The film opens on the bank of the in , Missouri, paddleboats and the Gateway Arch in the background. The action then shifts to . Finally we reach . And it was worth the wait. The mountain scenery, the wiggling roads with precipitous drops, the lunar landscape of the ‘Mountains of the Moon’ in the present a breath-taking backdrop for the race scenes. The landscape is tough and uncompromising – think the Mont Ventoux stages of the Tour de France, but higher and hotter and repeated day after day. Looking at the infrastructure, the crowds and the peloton of riders a conclusion can easily be drawn that this cycle race is something that actually exists, and which the filmmakers have piggy-backed on to. In actual fact this is correct: the ‘Coors Classic’ took place in from 1975 to 1988.

Can we go there?
The Coors Classic no longer runs, but the sites associated with it in can still be visited. The Morgul-Bismarck circuit race (stage 1 of the fictitious ‘Hell of the West’) was a real stage near – ‘The Wall’ is in . There was a stage – known as ‘’The Tour of the Moon’ – along Rim Rock Drive through the Colorado National Monument (cyclists today must stay in single file and have front and rear lights fitted ). Stage three commences in Golden (home of the Coors brewery which can be prominently seen) and runs along the  Mount Evans Scenic Byway to , near Idaho Springs.

Outside you can cycle along Laclede’s Landing in . A lot of the road-cycling scenes en route to actually took place in . The McDonalds where Davey meets Becky (Alexandra Paul), for instance, is in .